Fay’s Studio was founded in 2009 by illustrator Fay Martin. With the backing of the Prince’s Trust they aim to fulfil the demand for high quality, design-led greetings cards that consider the environment. Today we’ve got a few images from their latest collections.

The first year for Fay’s Studio has been non-stop with the greetings card collection hitting the shelves in retail outlets across the UK.  Fay launched her first greetings card ranges at this year’s Progressive Greetings Live, where she had tremendous success showcasing alongside the design idols of the UK greetings card scene. 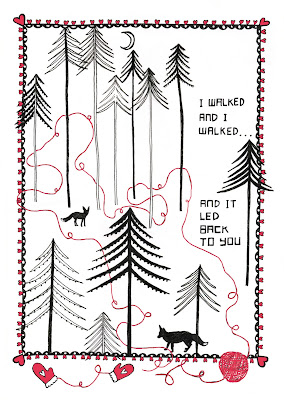 Fay’s Studio is happy to be a little outlandish, developing designs with Fay’s unique style that stand out from the crowd. Each image is delicately hand-drawn in Fay’s recognisable style. The range encompasses everything from serene, dream-like natural settings to cute and quirky characters that make you smile.

Priding herself on being different, Fay understands the importance of creating products that are not only creatively driven but also produced in an environmentally responsible manner.

All of Fay’s cards are printed on C6 sized FSC accredited, heavy weight board, wrapped in a 100% biodegradable cornstarch bag and matched with a co-ordinated FSC accredited envelope, making each one Eco-Friendly. All of the designs shown on today’s post are blank inside allowing them to be useful for multiple occasions.

The greetings cards retail at £2.30 each and can be purchased online via the Fay’s Studio website. For those of you who like your shopping a little less virtual you will also find a list of stockists on the site. Go have a mooch around the site and then come back and tell us what you think.